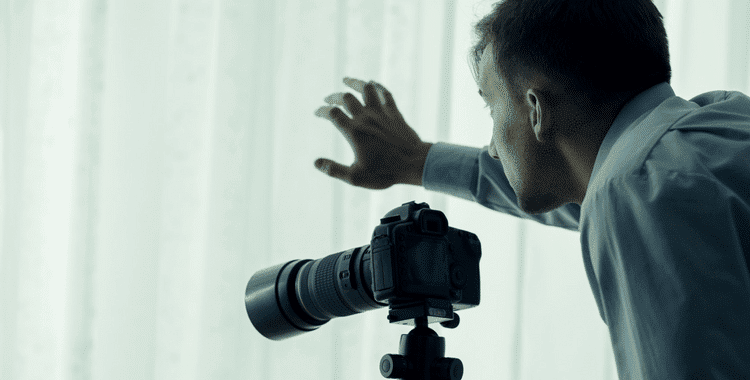 In basic terms, the crime of voyeurism is essentially any type of spying or surveilling on another person who believes they have an expectation of privacy, for the purposes of sexual desire. It’s known as the “Peeping Tom law.” There are a number of ways one can commit voyeurism. The classic case is peaking into someone’s bedroom window. Another common way is to hide a camera in a private place, such as a bathroom or locker room. As camera sizes have shrunk and surveillance technology has grown more complicated, voyeurism crimes have increased. Advances in technology and the temptation to place small cameras almost anywhere have led to voyeurism becoming considered by some to be the most commonly committed sex crime.

In order to convict someone in Washington State of voyeurism, the prosecutor must prove that the defendant

Voyeurism is a Class C felony in Washington State, meaning that it is less serious than a Class A or Class B felony but can still lead to imprisonment for up to 5 years and/or fines of up to $10,000.  Because Washington law designates voyeurism as a sex offense, a conviction also means registering as a sex offender, which may be required for 10 years. This also means being convicted of a voyeurism charge may carry many other additional restrictions, known as community custody conditions. The rules include supervision under a community custody officer and may range from prohibitions on where they can live, to whether they can consume alcohol or view pornography. They may even restrict the use or ownership of cameras or certain recording devices.

Recording people without their consent can also carry stiff monetary damages outside of fines for violating criminal law through civil claims. David Frick, a former longtime Bellingham city employee and Special Olympics coach caught videotaping female employees in a changing area at the Arne Hannah Aquatic Center in 2015, was ordered to pay $1 million dollars in damages to a couple by the Whatcom County Superior Court. The civil lawsuit filed against Frick alleged his actions recording the woman and other center employees while using the bathroom and staff locker rooms violated the woman’s privacy, created a hostile work environment, constituted sexual harassment and caused emotional distress that caused her to be unable to perform her job duties for a period of time. Of the $1 million in damages, $250,000 were to be paid to the woman’s husband (who Frick did not record) in part because of the damages his actions were found to cause to his photography and videotaping hobby.

In 2016, Seattle lawmakers amended Section 12A.10.120 of the Seattle Municipal Code because of increased concerns over the possibility of voyeurism crimes spreading due to evolving technology and consumer products, such drones and selfie sticks. Voyeurism in a public place is a gross misdemeanor but, unlike Washington State law, the Seattle ordinance applies regardless of whether the individual behind the camera has a sexual motivation.

Defending Against a Voyeurism Charge

The Marshall Defense Firm has defended special-assault cases like voyeurism for decades. The best way to attack a charge is to show reason to doubt one or more of the legal elements of voyeurism the prosecution must prove.

In Washington State, the prosecutor must prove the defendant:

Perhaps the person viewed, filmed, or photographed in your case actually consented to this conduct, or the location where the viewing took place was too public for anyone to have a reasonable expectation of privacy. Your attorney could also present a defense that whatever viewing, filming, or photographing occurred was not for sexual gratification, but for some other legitimate legal purpose.

The best way to build the strongest defense for your case is to consult right away with someone who will get to know you and your case. Our legal team is highly experienced in defending against sex offense charges, and we make respect and compassion the foundation of our work.

If you or a loved one needs services like ours, contact us at 206.826.1400 or solutions@marshalldefense.com for an appointment.